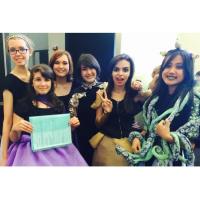 Oviedo, FL April 20, 2015 -- What do you get when you mix high heels, tentacles, bird feathers, and a lot of hot glue? For six Oviedo ninth graders, the answer is an award-winning skit and a trip to the Odyssey of the Mind World Finals in East Lansing, Michigan in May, where they’ll have a chance to square off against more than 800 teams from across the globe.

On Saturday, April 11 the Rotary Club of Oviedo team—Olivia Jacques-Baker, Alyssa Martin, Sofia Orta, Rachel Pleitez, Jessie Sui, and Juliana Voelker—took home first place honors at the Florida Odyssey of the Mind State Tournament. Founded in 1978 by an engineering professor in New Jersey, Odyssey of the Mind is a creative problem-solving competition that asks teams of students to tackle challenges like building vehicles that move without touching the ground or reinterpreting classic mythology as a video game—and students do it all without the help of adults.

“It’s an opportunity to both stay connected with friends and build upon problem solving and creative thinking skills that aren’t normally taught in schools,” says team member Olivia, 15.
Florida’s tournament, held annually at the University of Central Florida, is the second largest in the country. This year, over 250 teams competed for just 30 invitations to the World Finals. The Rotary Club of Oviedo team—Odyssey of the Mind veterans with a combined 27 years of experience—had their work cut out for them in order to earn their first ever trip to the international competition.

The team’s problem revolved around developing an eight-minute performance about a silent movie. Along the way, team members assembled a musical instrument out of an old bike wheel, created a variety of puppets, and sewed their own costumes in addition to writing an original script.

Since Odyssey of the Mind requires team members to both design and build everything themselves, supporters feel the program fosters the abilities students will need in the 21st century economy: curiosity, risk-taking, and ingenuity.

“It’s one of the few places where kids learn that it’s okay to fail,” says team coach and parent Pamela Baker. “Entrepreneurs and researchers know that failure is normal on the road to success. Team members have time to try out an idea and attempt to make it work in different ways before they find a solution that’s successful. That sort of understanding is invaluable.”

Over the next month, the team will continue to polish their performance and fundraise the $7,000 it will cost the team for travel and accommodations at World Finals.
“I’m most excited for the experience to meet people from around the world and see how they looked at the problem differently than us,” says Olivia. “I’m sure that what they’ve been through and how they were educated has shaped how they think creatively about things. Getting to see that aspect of Odyssey is really exciting.”

More information about Odyssey of the Mind and the World Finals can be found at http://www.odysseyofthemind.com. The Rotary Club of Oviedo team will be accepting donations to help support their trip to World Finals at: http://www.gofundme.com/oviedoodyssey
Contact:
Gail Bigelow, Management Analyst/Public Information
gbigelow@cityofoviedo.net, (407) 971-5507
Business Directory Events Calendar Hot Deals Member To Member Deals MarketSpace Job Postings Contact Us Weather
Go mobile with MyChamberApp!